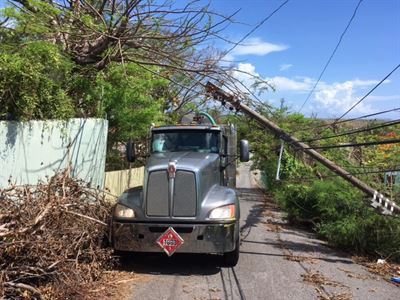 On Tuesday, January 7, Puerto Rico was struck by a 6.4 magnitude earthquake, throwing the island into a black out. A series of aftershocks, the largest being a quake of 5.9 magnitude on Saturday, have further damaged businesses and residences. CBS reported that as of Monday, January 13, 4,000 people are still seeking refuge in shelters while many others remain on the streets, terrified to return to their homes.

The total blackout is reminiscent of Puerto Rico’s post-disaster conditions in 2017, when the island was devastated by Hurricanes Irma and Maria. In the aftermath of these hurricanes it took a year for electricity to be completely restored on the island. The Costa Sur Plant, responsible for generating about 40% of the island’s electricity, was severely damaged due to its close location to the epicenter of Tuesday’s earthquake.  NBC reported that the restoration of the power plant might take up to a year, putting Puerto Rico’s weakened electricity grid under extreme pressure.

By Monday, January 13, PREPA reported via Twitter that they had restored electricity to 99% of their customers. However, even after the system has been completely restored there will be little room for error at any of Puerto Rico’s power plants, making further blackouts or brownouts likely.

President Trump signed an emergency declaration for Puerto Rico on January 7, which authorized FEMA to begin disaster relief efforts.  As of January 8, the damage resulting from the quakes was projected to reach as high as $3.1 billion, according to Chuck Watson, a disaster modeler with Enki Research.